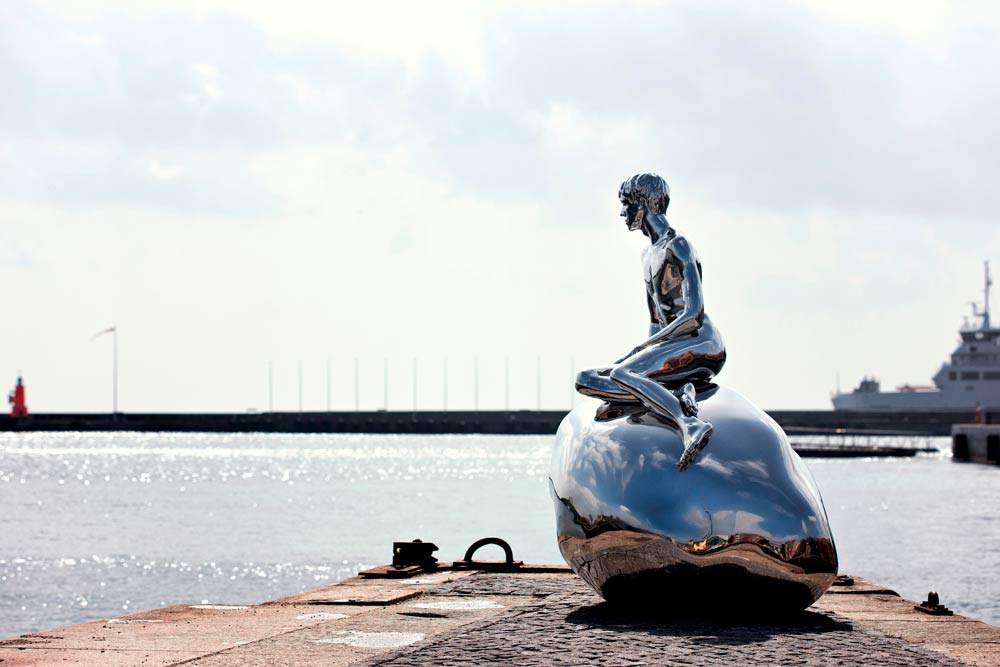 About The ‘Han’ Sculpture
It is a sculpture which is a male version of ‘The Little Mermaid’ which was located in Copenhagen. Unlike its female version (people often called female sibling), it has 2 human legs instead of a tail. This male Merman statue perched on rocks at the harbor and sitting in the same pose as the female version. It is a creation of Elmgreen and Dragset, artists based out of London and Berlin. It is commissioned by Elsinore City and the Arts Council of Denmark and it took 3 years in completion of this artistic statue. The ‘HAN’ is sitting in front of the most famous Kronborg castle of Elsinore, which is a world heritage site announced by UNESCO.

The Han Sculpture and the rock on which it is sitting are made of stainless steel. This statue of Han is made up of mirroring and distorting the surroundings in the sculpture’s curved surface. The rumor about this ‘Han’ Sculpture is that every thirty minute it blinks its eye for a split second. But, it is so quick that a blink of eye and you miss him seeing blinking. This makes this sculpture alive.

It will give a live and unique witness to your wedding as you can get married in front of the ‘HAN’ sculpture. Furthermore, the surrounding has a lovely harbor, and world heritage site ‘Kronborg Castle’.

We can arrange a perfect wedding for you in front of ‘The Han Sculpture’. Our wedding package includes the legal formality and paperwork for wedding registration, wedding cake and champagne to toast after the wedding. For more details view our wedding packages here https://elsinorewedding.com/wedding-packages/